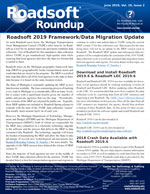 This issue annouces that there will not be an update to the Michigan geographic framework base map (MGF) from version 17 to version 19 during the current TAMC data collection cycle due to the ongoing technology update by the Michigan Department of Technology, Management and Budget (DTMB) and the Michigan Department of Transportation (MDOT). An update to the MGF version 19, along with the subsequent user data migration, will be included in a Roasoft release later this fall once the current TAMC data collection cycle is completed.

In addition, this issue annouces that the 2018 crash data, along with updated crash data for 2015-17, is available for import starting with Roadsoft 2019.6. The issue also announces the release of the Roadsoft Mobile 2019.5 update that includes the new Road module. Agencies can now use their mobile devices to rate roads using the PASER and IBR rating methods.